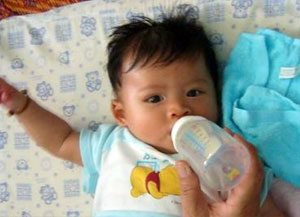 Babies are traditionally weaned from formula after their first birthday. Although you can wean them from bottles when they are older, transitioning them to cups at the same time you discontinue formula is preferable for two reasons. First, it’s better for a toddler’s language development if he drinks from a cup versus a bottle. The reason for this is because babies protrude their tongues when drinking from a bottle. Drinking from a bottle in the second year of life may increase their risk for developing speech problems. Second, if toddlers are weaned from the bottle at 18 to 24 months, they are more likely to stop drinking milk. They have been drinking milk from a bottle for so long, many of them simply won’t drink it from a cup. (Imagine your reaction if you were served a spaghetti sandwich, and you will understand how the “presentation” of a food item can affect ones desire to consume it.)

No one has researched the best way to wean babies, but the following method is the one I’ve been using for the past twenty years: