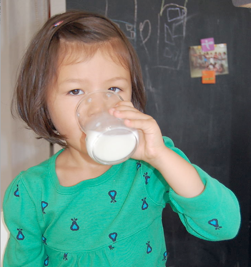 The American Academy of Pediatrics (AAP) recommends breastfeeding for the first year. Most mothers are unable to breastfeed their babies for the entire year because of work or family situations. This is perfectly acceptable.

If breast milk is unavailable, babies should be fed an iron-fortified formula. Babies are transitioned to whole milk at one year of age. In most cases, babies do not need the special formulas that are marketed for the second year of life.

The AAP recommends that children drink whole milk until two years unless there is a reason to switch the baby to low-fat milk sooner. Doctors may make this recommendation for clinical reasons or because there is a family history of obesity, heart disease or a cholesterol problem.

The reason the AAP recommends whole milk until two years has to do with a baby’s growth and development. Infants triple their birth weight by one year of age and quadruple their birth weight by two years. During this period, a baby’s brain and nervous system are making amazing gains in size and complexity. Because the brain and nervous system are largely composed of fat tissue, it is reasoned that the baby should have a higher fat diet during this period of time.

Whole milk contains approximately 4% milk fat. Because children often have difficulty with transitions, it may help to gradually switch your child from whole milk to lower fat milk. Therefore, some doctors recommend that children get reduced fat (2%) milk for a few weeks before switching them to low-fat (1%) or no-fat (skim) milk.

3 comments on “Switching your child to low-fat milk”