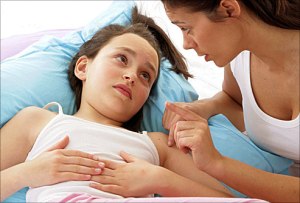 Although the human body isn’t perfect, there are lots of awesome ways that it functions. One of these is called the gastrocolic reflex. In this context, “gastro” refers to the stomach and “colic” refers to the colon or large intestine.

When we eat, the stomach stretches and begins digesting our meal. The stomach does this by releasing chemicals and contracting to break down the food we have eaten. At the same time, the “machinery” of the intestinal tract is turned on. The rhythmic contraction of the muscles in the stomach and intestine is called peristalsis. If a child is constipated, the onset of peristalsis within the large intestine (especially the rectum) can cause pain as the intestinal muscles contract against large or hard fecal material. If the pain was because of stool in the rectum, having a bowel movement will usually relieve the pain. If the pain was because of stool higher up in the large intestine, stooling won’t necessarily relieve the pain. Sometimes the pain is so severe that parents may worry their child has an appendicitis.

Constipation isn’t the only condition that can trigger pain after someone eats. Lactose intolerance, overeating and celiac disease can cause similar symptoms. However, 90% of the time pain after eating is due to constipation.

Once the child is evaluated, four things may ensue.

Except for the first two scenarios, the child’s management will be delayed if he eats or drinks anything before being seen.

If the doctor sends your child to the emergency room for a possible appendicitis, do not let him eat or drink anything until he has been “cleared” by the hospital staff.